HHBCR has many dogs that are deemed “unadoptable” or “difficult adoptions” due to their health issues, or in some cases behavioural problems. These dogs, which are in forever foster homes, require ongoing care, mostly medical.

The Sponsorship Program allows those who cannot foster or adopt to assist in a very special way. You may opt to sponsor a special dog on a monthly basis, donating directly to medical costs, or even donate monthly for the cost of dog food.

Here are our dogs presently in need of sponsorship: 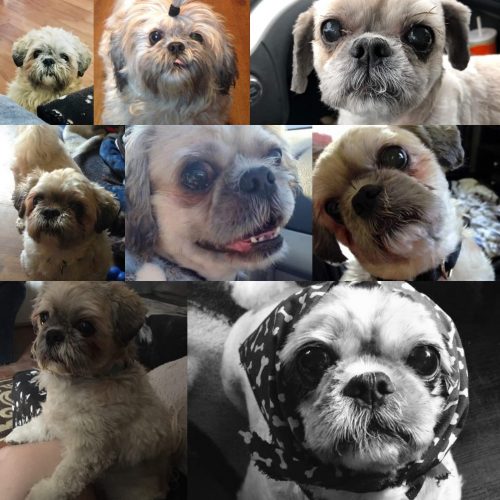 Fluffy came into our care in 2015 as an owner relinquish. We quickly learned of behaviour issues around touch and grooming; prone to quick, frequent escalation to bite. Flufferton, as he’s known to us, is a paradox. He’s also known for incredible sweetness of the gentlest kisses, quirky silliness, and more recently joyful glee.

After 2 failed adoption trials, it was clear that Flufferton wasn’t going to be adoptable. He requires a watchful eye, quick reflexes, and immediate correction…a steep learning curve that requires vigilance.

It was also clear he had chosen his home with us, each return to care from an adoption trial was met with, “Oh hey mom, where have you been? Let’s go home!”, as he charged to me for a quick pet before making a beeline and jumping directly into the car! It was only us that didn’t realize he was ours; he knew from the start that we were his family!

It’s been a roller coaster of a journey ever since, to say the least. Grooming remains a challenge despite years of devoted and dedicated effort working on behaviour; working closely with groomers to create a safe environment for him, them, and us. We’ve tried monthly, bi-weekly, and weekly visits in efforts to desensitize and create positive experiences to end on. We’ve tried visits that only included standing on the grooming table being petted by the groomer, touch with scissors, touch with clippers (off and on), touch with combs/brushes, standing in the bathtub being petted by the groomer (water off and on). We’ve tried long, brisk walks before appointments, increasing duration looking for a magic number of what he needed (20, 30, 45 minutes, 1 hour then ultimately up to 2) before each appointment. We’ve tried mini treats after every clip of the scissor, peanut butter on a plate as we clipped his nails or trimmed his paws. We’ve medicated and ultimately sedated more times than I can count because improvement remains minimal and inconsistent.

With his advanced age of 15, sedation becomes a higher risk with each exposure. It makes us nervous with the frequency required and we aren’t ready to assume the risk of losing him. So we have decided, for now, it is only us that are able to take on the risk he poses, not only to others but to himself. We’ve invested in professional tools to assist us: Kevlar elbow-length gloves (used for training eagles) and long, blunted professional grooming scissors that offer greater safety. We work with him at a slower pace trying to strike a balance between what needs to be done for wellness and his limit of stress to ensure safety. It’s a 2-man team effort to get the job done, one gloved providing traction and the other doing the grooming.

Ultimately, we know it will arrive at the time that sedation will be the only option because despite being in the safety of home, the safety of the people he trusts and the slow pace it remains incredibly stressful for him and just as stressful for us.

We love him dearly despite all these issues because it’s tempered with milestones of greatness that he’s able to just be a happy doggo.

He still cannot be petted by others, even we must also remain vigilant of his micro-cues in every interaction, but it’s in the small wins that prove we’ve created a safe, loving, and tolerant place for him to know it’s ok to just be him. He deserves that chance to have a happy tail and we’re so grateful that we’ve been able to give that to him. He’s our lil puddin’ pop and we’re ever grateful to HHBCR for entrusting him to us.

Sponsorship: $25 per month although any amount helps!

We would like to introduce you to Delta Dawn, another one of our forever fosters! Delta Dawn is such a sweet little lady whose life was terrible prior to her rescue. She came out of a terrible hoarding situation where there were over 45 dogs. She had patchy hair from flea dermatitis and nobody wanted her. All of the other rescues turned their backs on her. HHBCR took her in and she had 4 beautiful puppies. Sadly she was so frightened of everybody else that she never left her Foster home and has become a permanent Foster. Delta’s favorite pastime is herding all the other dogs, and playing with her new friend Opus, a puppy who uses a wheelchair to scoot around. She is sweet and gentle but also teaches him his boundaries. Delta would love to thank everyone who supports Hull’s Haven!

Sponsorship: $25 per month although any amount helps!

HHBCR has been accepted as BarkBox’s newest charity partner! Support us AND get $5 off when you use our special code: BBX1HULL. Help us raise some serious bones – we get a $15 donation with every order! Get started at BarkBox.com 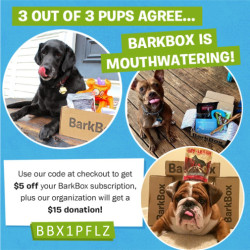 It is now even easier to donate items from our wish list, by shopping on-line on our Amazon page and have the donations delivered right to our door!